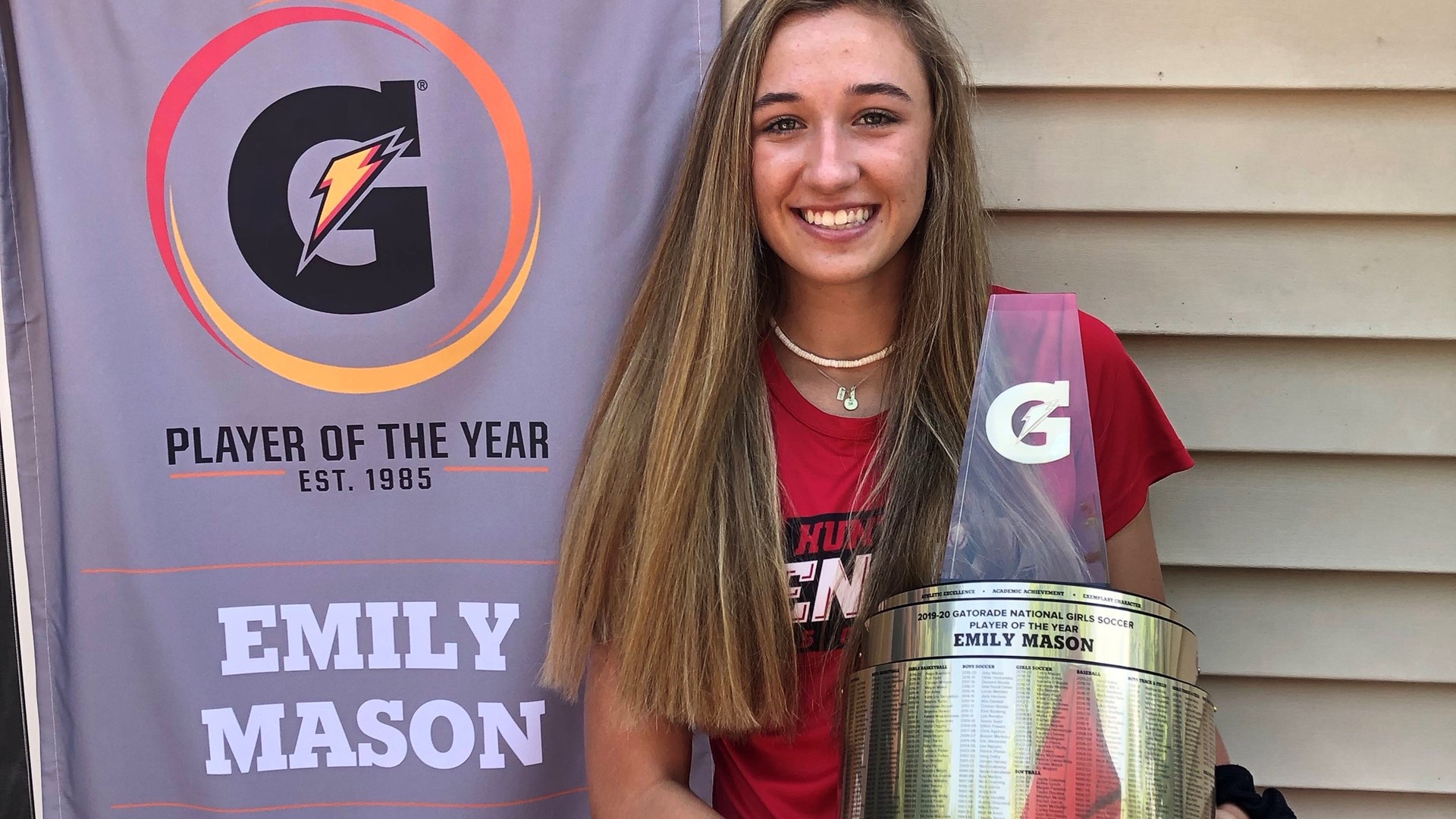 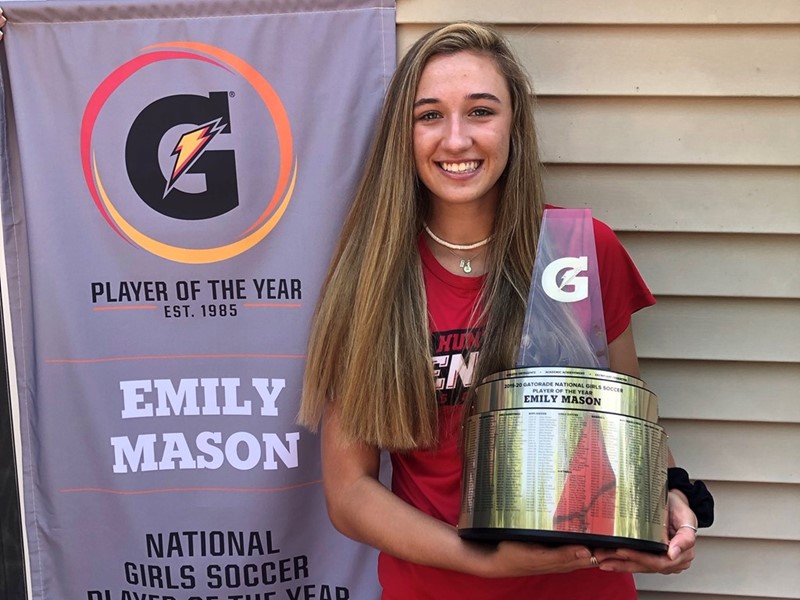 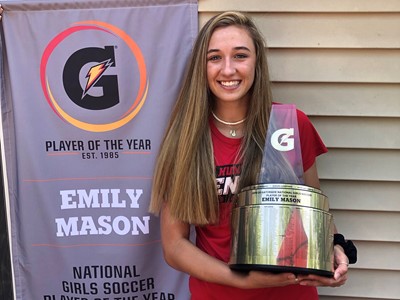 Flemington, N.J. [June 24, 2020] – In its 35th year of honoring the nation’s most elite high school athletes, The Gatorade Company today announced Emily Mason of Hunterdon Central Regional High School in Flemington, N.J. is the 2019-20 Gatorade National Girls Soccer Player of the Year. Mason won the prestigious award for her accomplishments on and off the field, joining an impressive group of former Gatorade National Girls Soccer Player of the Year winners who have gone on to have incredible success – they’ve combined for 17 gold medals and eight National Championships

Due to the ongoing situation with the coronavirus pandemic, Gatorade coordinated a virtual surprise, including a video call by Sky Blue FC’s Mallory Pugh to break the exciting news to Mason.

The award, which recognizes not only outstanding athletic excellence, but also high standards of academic achievement and exemplary character demonstrated on and off the field, distinguishes Mason as the nation’s best high school girls soccer player. A national advisory panel comprised of sport-specific experts and sports journalists helped select Mason from nearly a million high school girls soccer players nationwide.

Competition for the national award was fierce. Mason topped the list of 51 state winners in girls soccer who collectively boast an incredible list of accomplishments, including 21 First Team All-State selections, eight returning state Gatorade Players of the Year and 26 with a GPA of 4.0 and above

Mason is now a finalist for the most prestigious award in high school sports, the Gatorade Female High School Athlete of the Year award, which is announced in July.

“Emily Mason is relentless,” says United States U-20 Women’s National Team assistant coach Heather Dyche. “The game doesn’t faze her. She doesn’t go through any high highs or low lows. If you’re in a tie game, she’s saving balls off the line. If you’re up 3-0, she’s saving balls off the line. She was the youngest player on our team by far at the 2020 CONCACAF tournament and she really held her own. Emily has an incredibly bright future. She’s a great kid, too.”

The 5-foot-9 junior defender and midfielder led the Red Devils to a 21-1-1 record and the Group 4 state championship this past season. Mason recorded nine goals and three assists, including the lone score in a 1-0 win over unbeaten Eastern Regional High in the state semifinals. She also anchored a defense that surrendered just nine goals in 23 games. A member of the U.S. Soccer Under-20 Women’s National Team, Mason was a starting fullback in February as the U.S. team qualified for the 2021 Under-20 Women’s World Cup. The 2019 NJ.com State Player of the Year, she is ranked as the nation’s No. 3 recruit in the Class of 2021 by TopDrawerSoccer.com.

A participant in the Hunterdon Outreach Program supporting special needs children through athletics, Mason has volunteered locally on behalf of the Saint Elizabeth Ann Seton Church, including mentoring in the church’s Children’s Liturgy of the Word initiative. “Emily Mason is the best player we played against all season,” said Kevin Ewing, head coach of Scotch Plains-Fanwood High School. “We faced them twice and each time she was a major reason we could not do much offensively. She is physically dominating on the field and has a good first touch and excellent field vision.”

Mason has maintained a B average in the classroom. She has made a verbal commitment to play soccer on scholarship at Rutgers University beginning in the fall of 2021.

“Even with many sport seasons canceled or cut short this year due to the coronavirus pandemic, we are continuing to honor incredible student-athletes like Emily Mason through our Gatorade Player of the Year program,” said Gatorade Senior Vice President and General Manager Brett O’Brien. “Mason rose to the top of our list of nearly a million student-athletes who play girls soccer due to her athletic performance, success in the classroom and devotion to her community.”