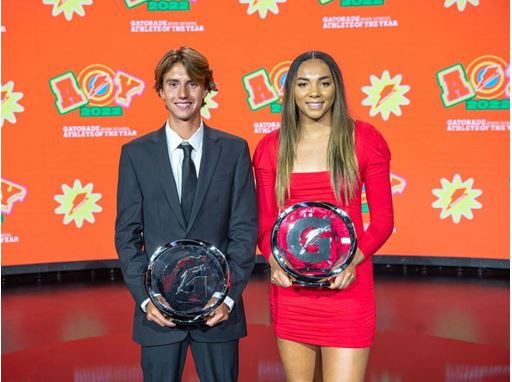 The winners were announced at Gatorade’s first in-person awards show since 2019, with a completely new look and feel thanks to influential artist Drake Cereal and host Taylor Rooks. Gatorade revamped its historically intimate award show to welcome the next generation of athletes to the family with the hottest ticket in high school sports. The exclusive ceremony was attended by sports influencers, professional athletes and former Gatorade Players of the Year, including:

“We brought together our Gatorade National Players of the Year for a one-of-a-kind, star-studded award ceremony and after party to recognize and celebrate the nation’s most outstanding high school student-athletes for their athletic excellence, academic achievement and exemplary character,” said Gatorade President and General Manager Michael Del Pozzo. “Joining the likes of Paige Bueckers, Sydney McLaughlin and Jayson Tatum, there’s no doubt this year’s winners of the prestigious Gatorade Athlete of the Year award have incredibly bright futures ahead.”

Making this year’s celebration even more special, each of the 12 nominees is memorialized in an NFT, created in collaboration with Vayner3.  These NFTs are available for sale to the public on OneOf.com/Gatorade through 5pm EST on July 20, 2022. The “Gatorade Game Changers: Player of the Year NFT Pack” is the brand’s first foray into Web3 and Non-Fungible Tokens and proceeds from the sales (less expenses of OneOf.com to issue the NFTs) will be donated to Good Sports, a nonprofit that drives equitable access in youth sports and physical activity.

Established 37 years ago in 1985, the Gatorade Player of the Year program recognizes the nation’s most elite high school athletes for their accomplishments on and off the field. Each year, a selection committee evaluates the nation's top talent to choose one state winner from each of the 50 states as well as Washington D.C., in 12 different sports: football, girls volleyball, boys and girls cross country, boys and girls basketball, baseball, softball, boys and girls soccer, and boys and girls track & field. From the 608 state winners, only 12 are selected as national winners for their individual sport and become nominees for Gatorade Athlete of the Year, which is awarded to the nation’s top overall female and male high school athletes. With more than six million student-athletes who participate in the 12 sports awarded by Gatorade Player of the Year, competition is fierce for the most prestigious award in high school sports.

Gatorade has a long-standing history of serving athlete communities and knows playing sports has the power to change lives, with lasting cognitive, social and emotional benefits, as well as increased chances to succeed in school and go to college. Through Gatorade’s “Play it Forward” platform, all Gatorade State Players of the Year have the opportunity to award a $1,000 grant to a local or national organization of their choosing that helps young athletes realize the benefits of playing sports. Gatorade also awards one spotlight grant of $10,000 for each of the 12 sports recognized by the program. To date, Gatorade Player of the Year winners’ grants have totaled more than $3.5 million across more than 1,300 organizations. New this year, Gatorade gave an additional $20,000 grant to the first-ever Gatorade Play It Forward Alumni Award winner, presented at the Gatorade Athlete of the Year awards show.

Kiki Rice: Washington D.C.’s returning Gatorade Girls Basketball Player of the Year, Rice of Sidwell Friends School led the Quakers to a 28-0 record and the DCSAA Tournament title this past season, earning her squad the nation's No. 1 national ranking by MaxPreps. Rice averaged 15.8 points, 7.0 rebounds, 5.1 assists and 2.6 steals per game and also lifted Sidwell Friends to the ISL Division AA tournament championship. Below are additional facts about Rice:

Colin Sahlman: California’s returning Gatorade Boys Cross Country Player of the Year, Sahlman of Newbury Park High School (Newbury Park, Calif.) raced to the individual national title at the Garmin RunningLane Cross Country Championships this past season with a time of 14:03.3, the fastest 5K time in US prep history, while also leading the Panthers to a national championship as a team. Below are additional facts about Sahlman:

The 12 Gatorade National Players of the Year are nominees for Gatorade High School Athlete of the Year, awarded to one male and one female. The nominees will walk the red carpet ahead of the ESPYs and be featured during the show, which airs live on ABC at 8:00 p.m. ET.

Below were this year’s nominees:

Past Gatorade Player of the Year award recipients have gone on to win hundreds of professional and college championships, and many have also turned into pillars in their communities, becoming coaches, business owners and educators.

Former winners of the Gatorade Male and Female High School Athlete of the Year award include:

To learn more about the Gatorade High School Athlete of the Year awards and Gatorade Player of the Year program, visit playeroftheyear.gatorade.com or follow us on social media on Facebook at facebook.com/GatoradePOY, Instagram at instagram.com/Gatorade and Twitter at twitter.com/Gatorade.

The Gatorade Company, a division of PepsiCo (NASDAQ: PEP), meets the needs of consumers who participate in sports and fitness, through brands that include Gatorade, Propel, Muscle Milk, and Evolve. The solutions they provide are driven by a deep understanding of the unique occasions and needs across athletic activity. Gatorade, their marquee brand, is underpinned by a 56-year history of studying the best athletes in the world, and sports nutrition research by the Gatorade Sport Science Institute, allowing it to provide scientifically formulated products that meet athletes' needs both on and off the field. For more information and a full list of products, please visit www.gatorade.com.

PepsiCo products are enjoyed by consumers more than one billion times a day in more than 200 countries and territories around the world. PepsiCo generated more than $79 billion in net revenue in 2021, driven by a complementary beverage and convenient foods portfolio that includes Lay’s, Doritos, Cheetos, Gatorade, Pepsi-Cola, Mountain Dew, Quaker, and SodaStream. PepsiCo’s product portfolio includes a wide range of enjoyable foods and beverages, including many iconic brands that generate more than $1 billion each in estimated annual retail sales.

Guiding PepsiCo is our vision to Be the Global Leader in Beverages and Convenient Foods by Winning with PepsiCo Positive (pep+). pep+ is our strategic end-to-end transformation that puts sustainability at the center of how we will create value and growth by operating within planetary boundaries and inspiring positive change for planet and people. For more information, visit www.pepsico.com.