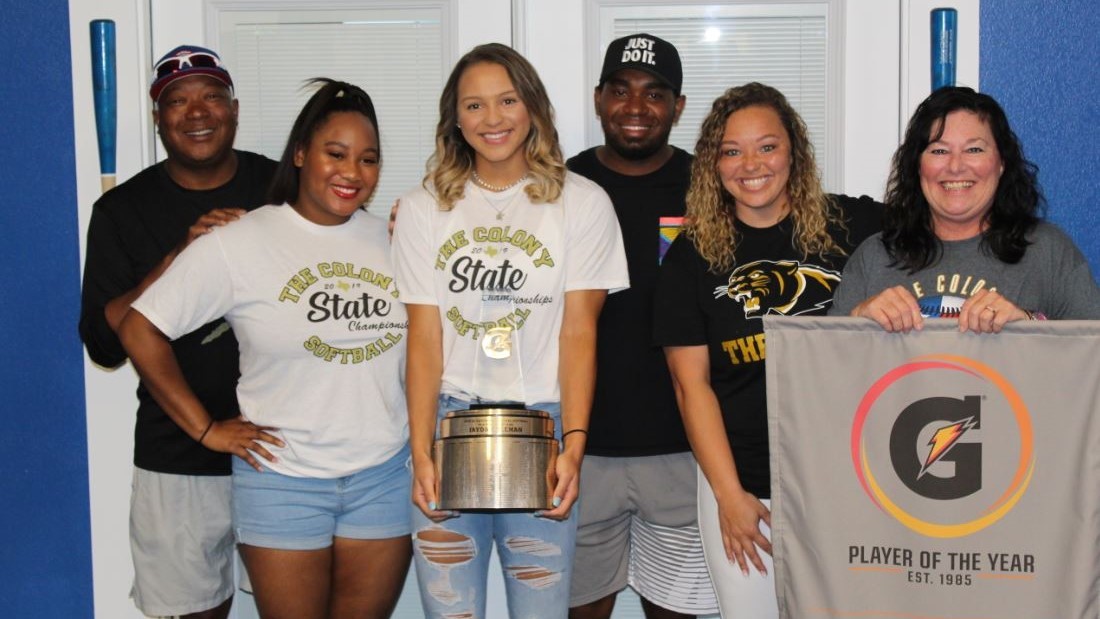 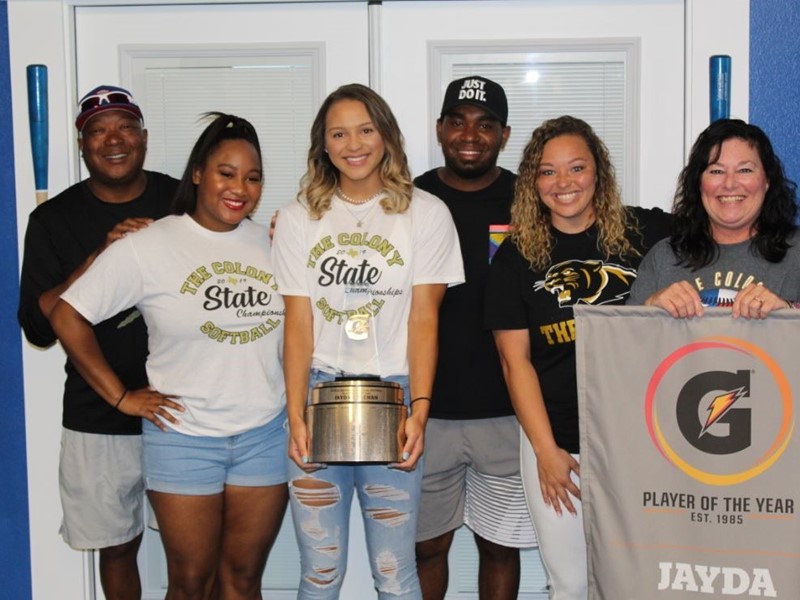 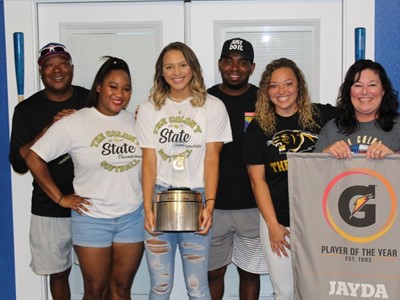 The Colony, Texas [June 10, 2020] – In its 35th year of honoring the nation’s most elite high school athletes, The Gatorade Company today announced Jayda Coleman of The Colony High School in The Colony, Texas is the 2019-20 Gatorade National Softball Player of the Year. Coleman won the prestigious award for her accomplishments on and off the field, joining an impressive group of former Gatorade National Softball Player of the Year winners who have combined for four National Championships, four NPF Championships and 10 have become coaches.

Coleman was surprised by her family, coaches and teammates at softball practice.

The award, which recognizes not only outstanding athletic excellence, but also high standards of academic achievement and exemplary character demonstrated on and off the field, distinguishes Coleman as the nation’s best high school softball player. A national advisory panel comprised of sport-specific experts and sports journalists helped select Coleman from nearly 400,000 other student-athletes who play softball nationwide.

Competition for the national award was fierce. Coleman topped the list of 51 state winners in softball who collectively boast an incredible list of accomplishments, including 13 best-in-state players by MaxPreps.com, 4 USA Softball team members, 5 SEC school committees and 15 with GPAs of 4.0 or higher.

Coleman is now a finalist for the most prestigious award in high school sports, the Gatorade Female High School Athlete of the Year award, which is announced in July.

“Jayda Coleman is a polished, cerebral player who is so smooth and poised that she makes everything look easy,” says Brentt Eads, President/Executive Editor of Extra Inning Softball. “From hitting over .700 to making diving stops and throws from her knees to stealing bases at will, she plays with grace and style, but she’s a fiery competitor with a powerful will to win. She always seems to be two steps ahead of the play and has great instincts and instantaneous decision-making abilities. She’s one of the smartest and most intuitive softball players I’ve ever seen. I believe she’s a once-in-a-generation-type talent.”

The 5-foot-10 senior shortstop and left-handed pitcher was one of only two high-school athletes on the 2019 USA Softball Junior Women’s National Team that won the U19 World Championships in August. Coleman compiled a .432 batting average and a .510 on-base percentage with 13 steals for Team USA. Through a 15-3-1 start by the Cougars this spring, Coleman batted .717 with 42 runs scored, 41 steals, 29 RBI and 10 triples. She also was 12-0 in the circle with a 0.89 ERA along with 75 strikeouts in 55 innings pitched before the season was cancelled. A three-time MaxPreps First Team All-American, she concluded her prep softball career with 279 hits, 261 runs scored, 209 stolen bases and a .702 batting average.

A member of the Fellowship of Christian Athletes, Coleman volunteers on behalf of PALS, which works with special needs children. She also participates in helping youth competitors train for the Special Olympics in addition to serving as an instructor in the Texas Glory club organization.

Coleman has maintained a weighted 3.63 GPA in the classroom. She has signed a national letter of intent to play softball on scholarship at the University of Oklahoma.

“With many spring sport seasons canceled to address the coronavirus pandemic, we feel it is more important than ever to honor and celebrate phenomenal student-athletes like Jayda Coleman,” said Gatorade Senior Vice President and General Manager Brett O’Brien. “Jayda is not only among the best high school softball players in the country, but she also shines in the classroom and her community, embodying everything we look for in a Gatorade Player of the Year recipient.”