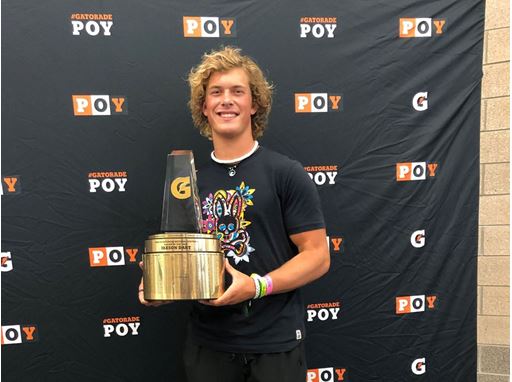 Draper, Utah. [May 26, 2021] – In its 36th year of honoring the nation’s most elite high school athletes, Gatorade today announced Jaxson Dart of Corner Canyon High School in Draper, Utah is the 2020-21 Gatorade National Football Player of the Year. Dart won the prestigious award for his accomplishments on and off the field, joining an impressive group of former Gatorade National Football Player of the Year winners who have combined for six NFL MVPs awards, 31 Pro Bowl appearances, six NFL first round draft picks and two became Hall of Famers.

Jacksonville Jaguars quarterback Trevor Lawrence virtually surprised Dart with the news, while his family, coaches and teammates showed up with the trophy at school. Check out a video of the announcement here.

The award, which recognizes not only outstanding athletic excellence, but also high standards of academic achievement and exemplary character demonstrated on and off the field, distinguishes Dart as the nation’s best high school football player. A national advisory panel comprised of sport-specific experts and sports journalists helped select Dart from more than one million high school football players nationwide.

Competition for the national award was fierce. Dart topped the list of state winners in football who collectively boast an incredible list of accomplishments, including 36 with signed National Letters of Intent to play football at Division I colleges/universities, 20 First Team All-State selections (including two 2019 selections due to coronavirus pandemic season cancellations) and 13 with a GPA of 4.0 and above.

“I can’t really recall a quarterback improving from junior to senior year to the degree of Jaxson Dart, who took his game to an elite level this past fall,” said Steven Wiltfong, director of recruiting for 247Sports. “A four-year starter, he made the game look like everyone else was moving in slow motion as he racked up nearly 6,000 yards of total offense and 79 total touchdowns, 67 of them coming through the air. Accurate to all levels of the field, he’s a strong-armed passer with a high football IQ. He added a running element to his game this past season, breaking teams down when he pulled the ball down as well. I think Dart is a national championship-caliber quarterback at the next level, and I’m excited to see what he does at USC.”

The 6-foot-3, 215-pound senior quarterback passed for 4,691 yards and 67 touchdowns this past season, leading the Chargers to a 14-0 record and the Class 6A state championship. Dart completed 240 of 345 passes, throwing just four interceptions, while also rushing for 1,195 yards and 12 TDs on 128 carries. The MaxPreps National Player of the Year, he was also selected Mr. Football by the Deseret News. Dart was ranked as the nation’s No. 19 recruit in the Class of 2021 by ESPN.

Dart has assisted elderly members of his community and has volunteered locally on behalf of a food bank and clothing donation drives.

Dart has maintained a 3.98 GPA in the classroom. He has signed a National Letter of Intent to play football on scholarship at the University of Southern California this fall.

“Time and again, we see Gatorade National Players of the Year go on to great things, such as playing on professional teams, winning National Championships, as well as becoming coaches and role models for future generations of athletes,” Gatorade Senior Vice President and General Manager Brett O’Brien. “Jaxson Dart joins a list of impressive student-athletes who have won the prestigious award and we are confident he is headed for a lifetime of similar accomplishments.”