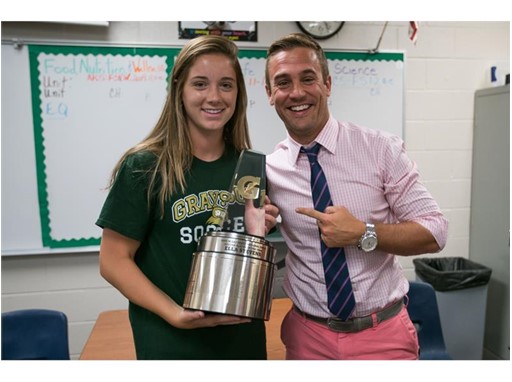 The surprise was staged during a boys and girls soccer luncheon at the school. It was an extra special announcement for Ella, as Robbie Church, Duke University Head Women’s Soccer Coach, attended the surprise to congratulate her on the honor and again welcome her to the university’s women’s soccer program next year.

​In addition to the above, the video is available on the Gatorade POY YouTube page: Ella Stevens 2015-2016 Gatorade National Girls Soccer Player of the Year​

In its 31th year of honoring the nation’s best high school athletes, The Gatorade Player of the Year Program recognizes not only outstanding athletic excellence, but also high standards of academic achievement and exemplary character demonstrated on and off the field.