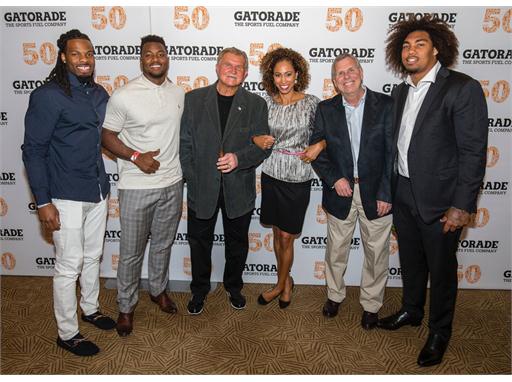 In celebration of Gatorade’s 50th anniversary and the NFL Draft returning to Chicago for the first time since 1964, the brand held a special Gatorade Evolution of Football panel discussion and reception on April 29th at the Art Institute of Chicago.

“When I first started playing football in high school, I was eating however I wanted. I caught myself getting cramps all the time when I was running and not feeling as well after workouts; recovering really slowly. The more mature I got and the more I started playing football and understanding that nutrition is a big part after workouts, it really helped my muscles grow faster...just being able to recover a lot faster and staying hydrated and eating the right stuff...”

“If you lose electrolytes out of your system, water does not do it. When Gatorade came out, it was a fantastic product. It’s the greatest thing in the world. The worst thing you can do is surfer fatigue or end up with a fatigued muscle or a pulled muscle. It’s not fool proof but it will certainly help you.”

“You need to put the right things your body. So, you have to make sure you hydrate right and eat right so when that time [game time] comes, you’re ready and you’re healthy.”

“Fueling for performance is very important and having electrolytes in your body. That means you aren’t going to pull a hammy or get cramps. I’m a guy that has about three to four percent body fat. If I don’t drink a Gatorade or one of those salt packets that Gatorade gives out every day before practice, I cramp up easily - my forearms and my calves. Eating the right things and drinking the right things helped my game out a lot. That was another thing I did to try and separate myself. I tried to eat well and put the electrolytes in my body.”