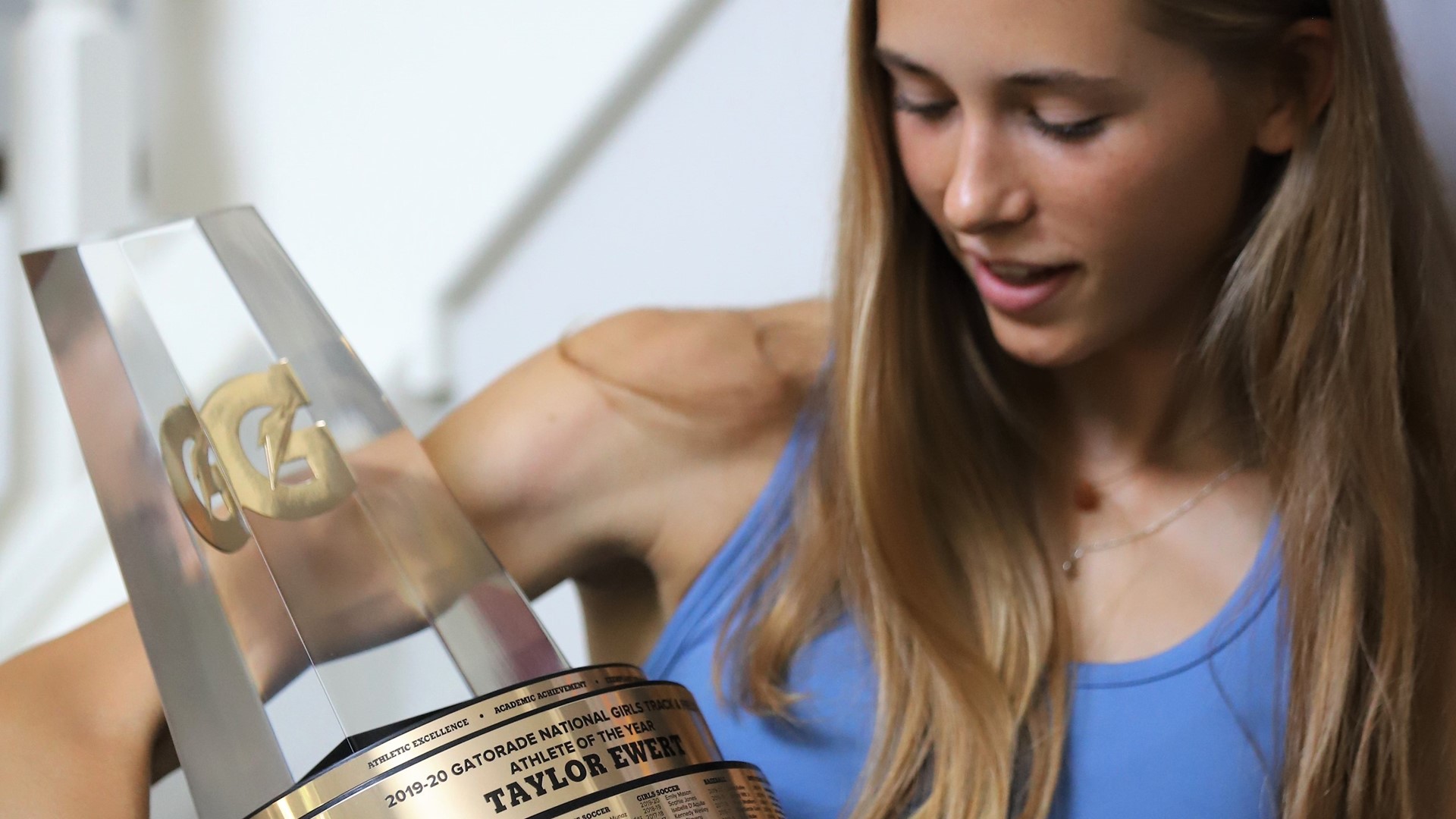 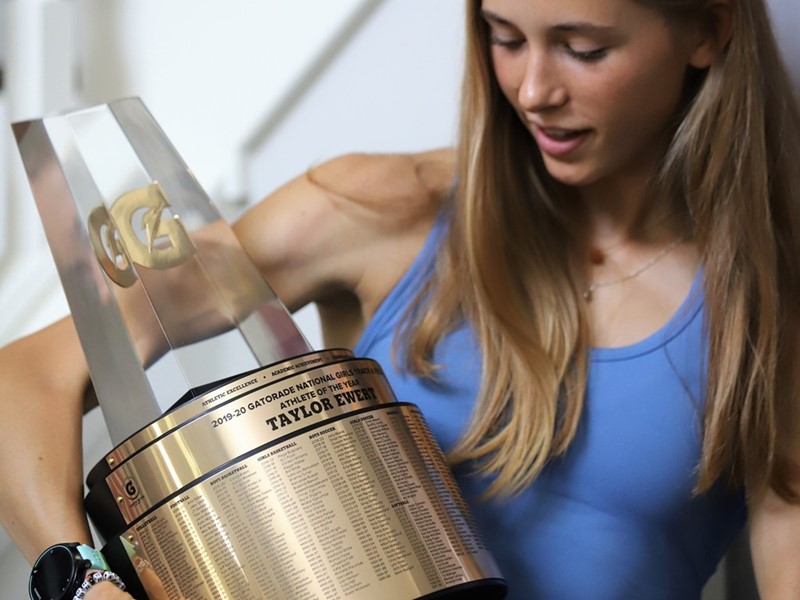 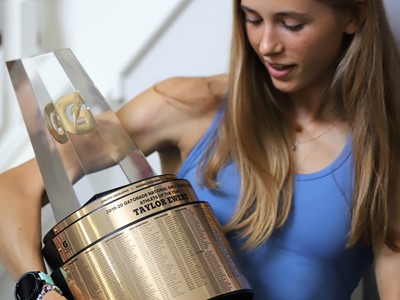 Ewert was surprised with the trophy by her family at home.

The award, which recognizes not only outstanding athletic excellence, but also high standards of academic achievement and exemplary character demonstrated on and off the field, distinguishes Ewert as the nation’s best high school girls track and field athlete. A national advisory panel comprised of sport-specific experts and sports journalists helped select Ewert from more than one million other student-athletes who compete in girls track and field nationwide.

Competition for the national award was fierce. Ewert topped the list of 51 state winners in girls track and field who collectively boast an incredible list of accomplishments, including seven with All-American honors, 40 who volunteer at two or more organizations, and 25 with GPAs of 4.0 or higher.

Ewert is now a finalist for the most prestigious award in high school sports, the Gatorade Female High School Athlete of the Year award, which is announced in July.

"Taylor possesses a unique skill set we haven’t seen from any prep athlete in the sport for at least two decades,” says Erik Boal, an editor for DyeStat. “In addition to her unparalleled success as an American Junior (U20) in the race walk, holding the record in seven distance categories, she has also showcased the capacity to match strides with any of her elite peers in the steeplechase—where she clocked a World Top 25 time among women of all ages in 2019 (2,000 meters)—as well as traditional distance races in cross country and track. Her meticulous preparation, unconditional dedication and relentless determination are qualities that led her to Arkansas, and will eventually take her incredible journey to the Olympic Games."

The 5-foot-10 senior won the 1600-meter run with a time of 4:52.02 and the 3200-meter run in 10:34.79 at the 2020 Division 1 indoor state meet. The Gatorade Ohio Girls Cross Country Runner of the Year, Ewert won the two-mile event at the University of Kentucky High School Invitational in March with a time of 10:18.94, which ranked as the nation’s No. 3 performance among prep indoor competitors this past winter. She clocked U.S. Top 10 prep times in three indoor events in 2020 and U.S. Top 20 in three outdoor events in 2019. The state champion in the 3200 last spring, she also won the 2000-meter steeplechase at the 2019 New Balance Nationals Outdoor, while placing second in the mile and the 4x800 relay. Ewert’s personal-best time in the steeplechase ranks No. 7 in prep history, and she’s also ranked in the all-time Top 35 for the indoor two-mile and the all-time Top 50 in the outdoor mile among high school girls. She holds seven national high school records in race-walking as well as seven American U20 records in that sport.

Also a talented artist, Ewert has been an altar server at Wright Patterson Air Force Base Chapel for six years, and she’s supported the homeless through AFB Chapel Youth Group. She has also served as an inspirational speaker for summer program athletes at West Liberty-Salem High School in addition to volunteering as a meet official and instructor for middle school athletes with her track club as well as donating her time at the Beavercreek XC Camp for elementary athletes, teaching a mini-class on race walking. “Taylor is one of a kind and an absolute joy to coach,” said Beavercreek High School distance coach Howard Russ. “The quality that really makes her different from other athletes is her attention to details. She’s the most driven athlete that I’ve ever coached.”

Ewert has maintained a weighted 3.49 GPA in the classroom. She has signed a National Letter of Intent to run on scholarship at the University of Arkansas.

“Despite so many sport seasons being canceled or cut short due to the coronavirus pandemic, the Gatorade Player of the Year program continues to recognize and celebrate the nation’s most elite student-athletes for their incredible accomplishments on and off the field,” said Gatorade Senior Vice President and General Manager Brett O’Brien. “Taylor Ewert is a leader and role model in her sport, the classroom and her community and we look forward to seeing her continue to succeed in both sports and life.”

The Gatorade Company, a division of PepsiCo (NASDAQ: PEP), meets the needs of consumers who participate in Sports and Fitness, through brands that include Gatorade, Propel, Muscle Milk and Bolt24. The solutions they provide are driven by a deep understanding of the unique needs and occasions of different types of sports and fitness. Gatorade, their marquee brand, is underpinned by more than 50-year history of studying the best athletes in the world and sports-nutrition research by the Gatorade Sport Science Institute, allowing it to provide scientifically-formulated products that meet athletes’ needs both on and off the field. For more information and a full list of products, please visit www.gatorade.com.

PepsiCo products are enjoyed by consumers more than one billion times a day in more than 200 countries and territories around the world. PepsiCo generated more than $64 billion in net revenue in 2018, driven by a complementary food and beverage portfolio that includes Frito-Lay, Gatorade, Pepsi-Cola, Quaker and Tropicana. PepsiCo's product portfolio includes a wide range of enjoyable foods and beverages, including 22 brands that generate more than $1 billion each in estimated annual retail sales.

At the heart of PepsiCo is Performance with Purpose – our fundamental belief that the success of our company is inextricably linked to the sustainability of the world around us. We believe that continuously improving the products we sell, operating responsibly to protect our planet and empowering people around the world enable PepsiCo to run a successful global company that creates long-term value for society and our shareholders. For more information, visit www.pepsico.com.