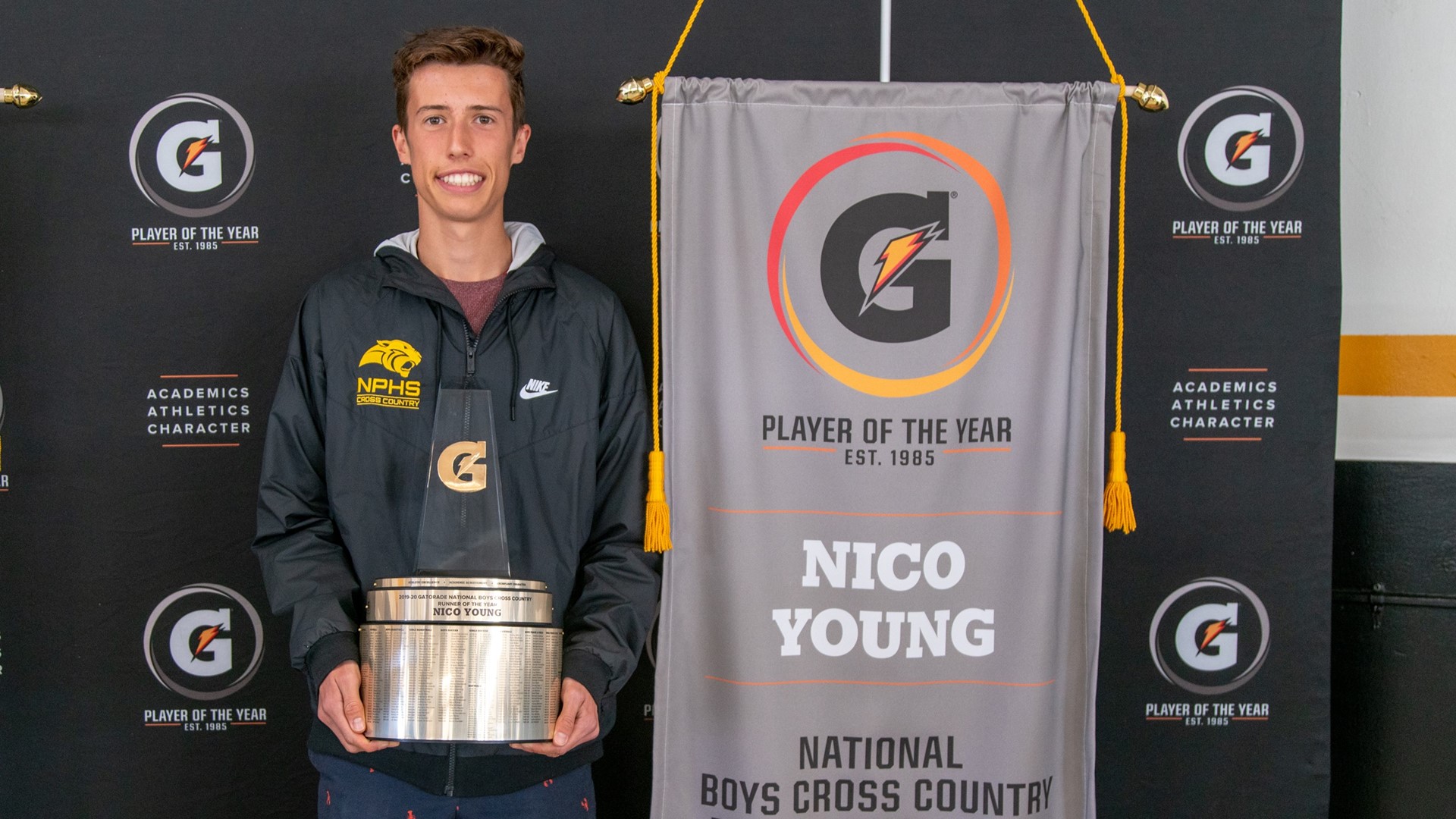 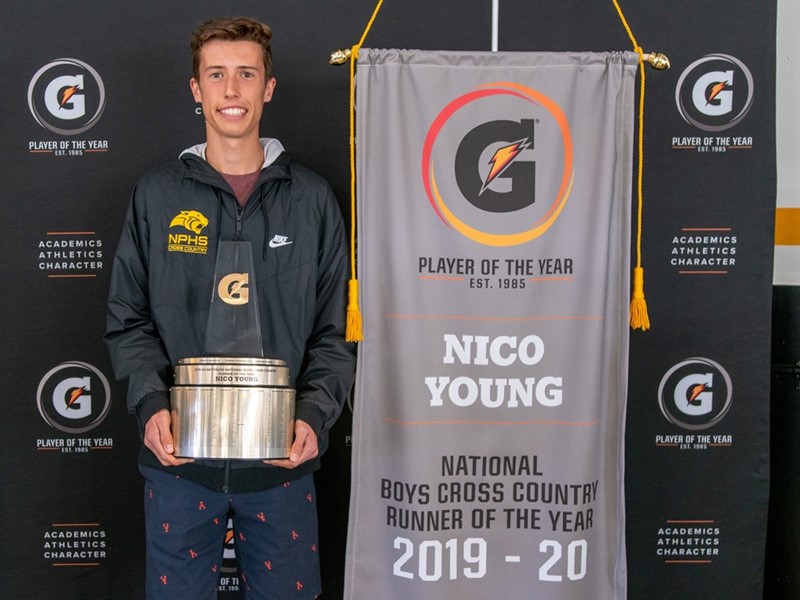 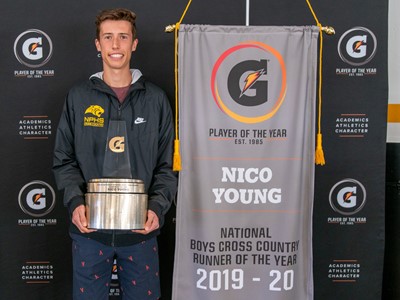 Newbury Park, Calif. [February 20, 2020] – In its 35th year of honoring the nation’s most elite high school athletes, The Gatorade Company today announced Nico Young of Newbury Park High School in Newbury Park, Calif. is the 2019-20 Gatorade National Boys Cross Country Runner of the Year. Young won the prestigious award for his accomplishments on and off the field, joining an impressive group of former Gatorade National Boys Cross Country Runner of the Year winners who have combined for 18 National Championships.
Young was surprised with the award in front of teammates, coaches, friends and family at his school.
The award, which recognizes not only outstanding athletic excellence, but also high standards of academic achievement and exemplary character demonstrated on and off the field, distinguishes Young as the nation’s best high school boys cross country runner. A national advisory panel comprised of sport-specific experts and sports journalists helped select Young from nearly 300,000 high school boys cross country runners nationwide.
Competition for the national award is fierce. Young topped the list of 51 state winners in boys cross country who have an incredible list of accomplishments including 15 All-Americans. Of this year’s winners, 84% percent of the seniors will be on scholarship this fall, more than 20 with a GPA of 4.0 or higher and over 30 volunteering with at least two organizations.
Young is now a finalist for the most prestigious award in high school sports, the Gatorade Male High School Athlete of the Year award, which is announced at a special ceremony prior to The ESPY Awards in July.
“Nico Young didn't shy away from setting lofty goals for both himself and his Newbury Park teammates this past season,” said Erik Boal, editor for DyeStat.com. “Those grand ambitions were not only met, but often exceeded during one of the most dominant seasons in high school cross country history. Although he raced fewer times than most of the country’s top athletes last fall, he established a new meet or division standard in seven of eight outings, including the national 3-mile cross country record at the Woodbridge Classic, along with the best 5K performance in Nike Cross Nationals history to win a national championship and lead the Panthers to the national team title.”
The 5-foot-11, 135-pound senior raced to the national championship this past season, breaking the tape at the Nike Cross Nationals Final with a course-record time of 14:52.3 and leading the Panthers to the national title as a team. He also set a U.S. prep three-mile record of 13:39.7 last fall in winning the Woodbridge Classic. Moreover, Young has volunteered locally for three summers in a row as a camp assistant at Many Mansions for underprivileged youth. He has accomplished these athletic feats, all while maintaining a 4.68 GPA in the classroom.
“Nico Young was selected as this year’s Gatorade National Boys Cross Country Runner of the Year because of his achievements on and off the field,” said Gatorade Senior Vice President and General Manager Brett O’Brien. “It is a prestigious honor and we’re excited to see what is next for this impressive student-athlete.”
Through Gatorade’s cause marketing platform “Play it Forward,” Young has the opportunity to award a $1,000 grant to a local or national youth sports organization of his choosing. He is also eligible to submit an essay to win one of twelve $10,000 spotlight grants for the organization of choice, which will be announced throughout the year.
Each year a selection committee evaluates the nation’s top talent in the District of Columbia and all 50 states, choosing national winners in 12 different sports: football, girls volleyball, boys and girls cross country, boys and girls basketball, baseball, softball, boys and girls soccer, and boys and girls track and field. From the 12 national winners, one male and one female athlete are each named Gatorade High School Athlete of the Year.
Since the program’s inception in 1985, Gatorade Player of the Year award recipients have won hundreds of professional and college championships, and many have also turned into pillars in their communities, becoming coaches, business owners and educators. Previous winners include a distinguished list of athletes, such as Peyton Manning, Abby Wambach, Karl-Anthony Towns, Derek Jeter and many other sports icons. To learn more about the Gatorade Player of the Year program, check out past winners or to nominate student-athletes, visit www.Gatorade.com/POY, on Facebook at www.facebook.com/GatoradePOY or follow us on Twitter at www.twitter.com/Gatorade.
About Gatorade
The Gatorade Company, a division of PepsiCo (NASDAQ: PEP), meets the needs of consumers who participate in Sports and Fitness, through brands that include Gatorade, Propel, Muscle Milk and Bolt24. The solutions they provide are driven by a deep understanding of the unique needs and occasions of different types of sports and fitness. Gatorade, their marquee brand, is underpinned by more than 50-year history of studying the best athletes in the world and sports-nutrition research by the Gatorade Sport Science Institute, allowing it to provide scientifically-formulated products that meet athletes’ needs both on and off the field. For more information and a full list of products, please visit www.gatorade.com.
About PepsiCo
PepsiCo products are enjoyed by consumers more than one billion times a day in more than 200 countries and territories around the world. PepsiCo generated more than $64 billion in net revenue in 2018, driven by a complementary food and beverage portfolio that includes Frito-Lay, Gatorade, Pepsi-Cola, Quaker and Tropicana. PepsiCo's product portfolio includes a wide range of enjoyable foods and beverages, including 22 brands that generate more than $1 billion each in estimated annual retail sales.
At the heart of PepsiCo is Performance with Purpose – our fundamental belief that the success of our company is inextricably linked to the sustainability of the world around us. We believe that continuously improving the products we sell, operating responsibly to protect our planet and empowering people around the world enable PepsiCo to run a successful global company that creates long-term value for society and our shareholders. For more information, visit www.pepsico.com.
###